Social Learning Affects Life Outcomes: So why call it Non-Cognitive?


Having been in this field for several decades now, it’s my understanding that cognition comes from our neurology and our neurology is parked in our brain. So technically if something is “non-cognitive” its origin is non-neural or non-brain based. So are these “experts” suggesting that social skills come from our knee-cap or elbow? Of course not, but this loose labeling of a set of highly complex skills is troubling, to say the least, to me.


Furthermore, do students simply intuit “social skills” or is there actually a world of learning associated with being social? The research is strong in demonstrating that our social abilities are a by-product of many other processes: perspective taking/theory of mind, conceptual processing, executive functioning, social attention, auditory processing, interpretation of nonverbal cues, situational cues, etc. They are also dependent on the situation (context), and the people (cultural and social-emotional factors). Being “successful” in social situations, which we can think of as having “good social skills”, means we are continually and to some extent, consciously, thinking about and considering all these social elements and more, all within each moment of interaction. Is all of that mental work “non-cognitive”?


In any given moment we typically gauge a person’s social abilities by observing their social behaviors. Most of us create our social behaviors with relative ease; it comes “naturally.” The ease by which we do this shouldn’t be confused, however, with the complexity of the underlying processing; there is far more going on below the social-cognitive surface. All of these “non-cognitive” social skills constitute an inner universe that is intricate, complicated, and multifaceted. To navigate the realms of self-awareness, self-regulation, situational attention, motives, intentions and the continuously changing landscape of bi-directional communication and social interaction, our brain is the engine and our social thinking is the fuel that propels us to social success. And there we are – back to the brain, the seat of our cognitive processing. Is there anything “non-cognitive” about it?


Human beings operate on a continuum of social understanding, from those who struggle dramatically because of brain-based social learning challenges to the highly adept social processors who can handle any situation they find themselves in without so much as a twitch of their elbow or eyebrow. To help a person with even strong language and academic learning skills acquire improved social skills, we have to first shift their understanding from self to others: to consider their own and others’ perspectives, emotional self-management, and social self-awareness. (And by the way, that’s exactly what we do through Social Thinking: help teach the many and varied processes that guide our students’ social learning and related social skills. Need I say it? It’s cognitive learning.)


You may think it silly or esoteric to worry about the fact that people—even highly educated people–refer to the process of social emotional learning as “non-cognitive” and that it’s okay to refer to this complex universe of social learning as “just teaching social skills.” I would argue that in these evidence-based times the broad acceptance of social teachings as core to every student’s development depends, in large measure, on how seriously we consider the process of social emotional learning itself.


Obviously our education systems will, and do, struggle to take this seriously and give social emotional skills the attention they deserve if policy-makers, the media, and government education officials continue to refer to all this as “non-cognitive.” It implies an “off the cuff” or “no thinking needed” process that certainly doesn’t warrant our time, attention, or fiscal dollars. This is especially true when viewed through the lens of our current insistence on raising academic scores and in light of hard-to-find funding for learning that is considered non-academic in nature.


To help clarify how “cognitive” all this social emotional learning is, I have been following a slew of research studies that maximize the importance of social emotional learning (e.g. social skills, also referred to as “soft skills” or “nonacademic skills”). Many of these studies received an excellent review in a recent NYTimes opinion piece by David Bornstein, “Teaching Social Skills to Improve Grades and Lives” (July 24, 2015), even if I have to forgive him for carrying on the myth that these skills are “non-cognitive” in nature. His review of the research included the results of the Fast Track Project which, after more than a decade of following children as they aged, concluded that “Children who scored high on social skills were four times as likely to graduate from college than those who scored low.” Bornstein, in his article, goes on to say,

“These studies suggest that if we want many more children to lead fulfilling and productive lives, it’s not enough for schools to focus exclusively on academics. Indeed, one of the most powerful and cost-effective interventions is to help children develop core social and emotional strengths like self-management, self-awareness and social awareness — strengths that are necessary for students to fully benefit from their education, and succeed in many other areas of life.”


** this same data has been replicated many times across a variety of studies.


Fast forward to the 21st century and the growing attention to the impact technology is having on children’s social emotional development and school readiness skills, well before they step foot into a classroom. Pivotal technology changing years included 2007 when the iPhone was introduced, followed by the introduction of the iPAD in 2010. According to Common Sense Media, a San Francisco-based nonprofit, between 2011 and 2013, the percentage of families with children age eight and under who owned tablets grew from 8% to 40%. Even more remarkable, the percentage of children with access to a smartphone or tablet jumped from 50% to 75% of those surveyed. Two additional years have lapsed; the figures are undoubtedly even higher.


The research is just beginning to support the real concerns of parents, teachers, and pediatricians who are asking how much screen time is just too much for children’s social development. And many of the findings point us back to play, face-to-face interaction, and non-academics as being the driving force for social development.

The evidence is strong: play skills and other non-academic skills facilitate critical thinking and actually contribute to, not detract from, other aspects of academic development. They also encourage us to be good members of our community, and provide an opportunity to improve conflict resolution skills, emotional self-management, etc.


Just to summarize, I find my knee-caps and elbows quite useful; please note that even they need neurology to function. Social skills are helpful but they do not stand on their own two feet. Our brain is the source of all learning.

Michelle Garcia Winner is the creator of the Social Thinking methodology and founder/CEO of Social Thinking. A prolific writer and international speaker, she specializes in the treatment of individuals with social learning challenges at the Social Thinking Center, her clinic in San Jose, California. Michelle helps educators, mental health professionals, and parents appreciate how social thinking and social skills are integral to a person’s success in school, in the community, and in their career.

American Academy of Pediatrics. (2011, October 19). Babies and toddlers should learn from play, not screens. Retrieved from ScienceDaily.

Set 1 serves two purposes: A. provides interventionists with information to assess the needs of their social learners through 7 conceptual frameworks and B. provides 6 treatment frameworks for use with social emotional learners. Each one of these ready-to-use visual scaffolds displays an important social concept through a user-friendly graphic on one side and step-by-step instructions and resource recommendations on the back.
see more

You Are a Social Detective! Explaining Social Thinking to Kids, 2nd Edition (Storybook)

A multiple award winner! The social world is a big, complicated place that requires us to constantly figure out hidden rules in situations to help us make sense of how we are all interpreting and responding to each other’s actions and reactions. Expanded and revised, this award-winning 2nd edition storybook provides an all-new structured approach to observation, illustrations that reflect a broader range of inclusion and diversity in characters, and lessons for deeper learning.
see more

Our informative and accessible bestseller is ground zero for understanding and applying core components of the Social Thinking Methodology. It explores the social learning process and weaves together research with ways to teach specific social competencies. Introduces core treatment frameworks and related strategies and presents the Social Thinking Dynamic Assessment Protocol. Foundational reading for professionals and family members.
see more 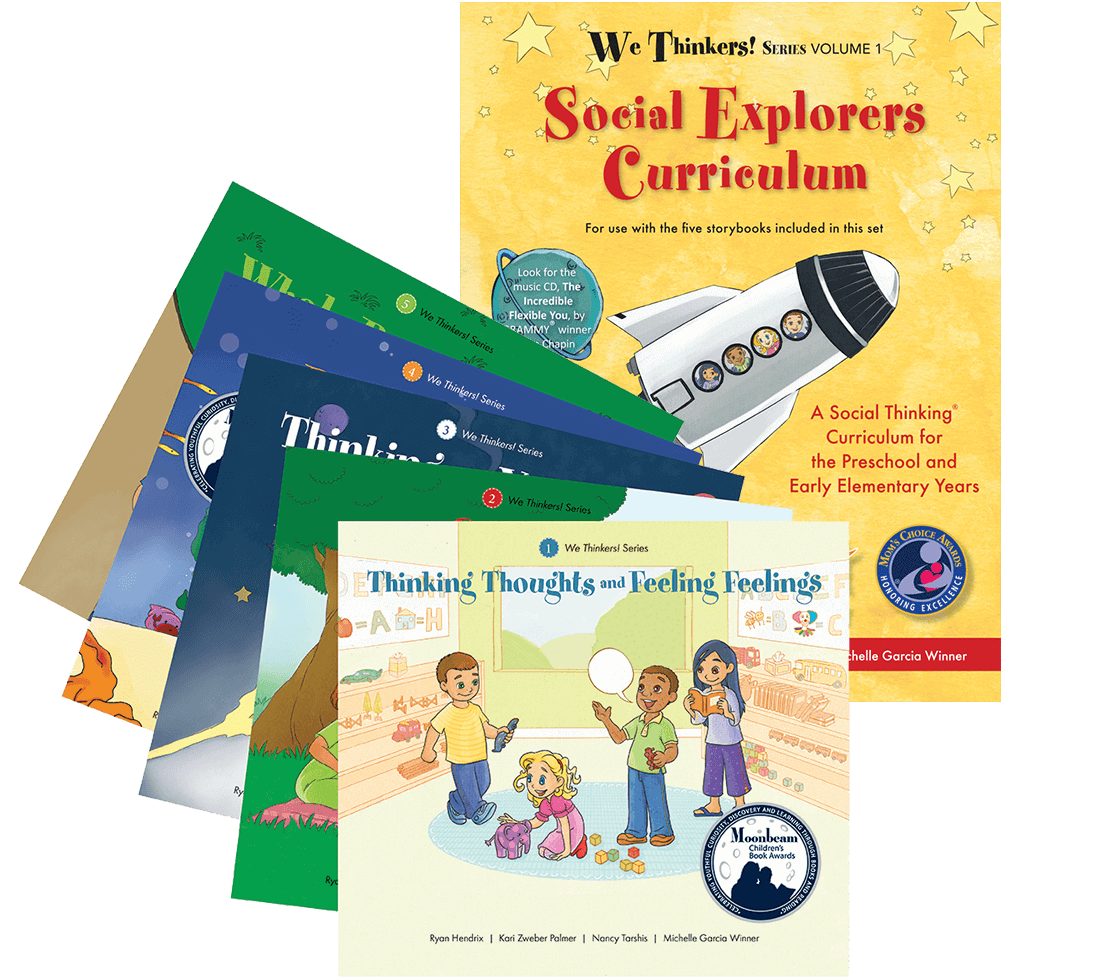 Our premier social emotional learning package for children ages 4–7 helps develop foundational social competencies. The multiple award-winning We Thinkers! Volume 1: Social Explorers includes five storybooks and a thorough unit-by-unit curriculum. The storybooks correspond to and support detailed lessons for teaching five evidence-based concepts that establish a common social vocabulary for early learners and are fundamental to all social experiences. These practice-proven materials are designed for both neurotypically developing children and those with social learning differences and/or challenges to strengthen perspective taking, self-awareness, and so much more. The We Thinkers! series is loved around the world by kids, parents, and professionals alike!
see more 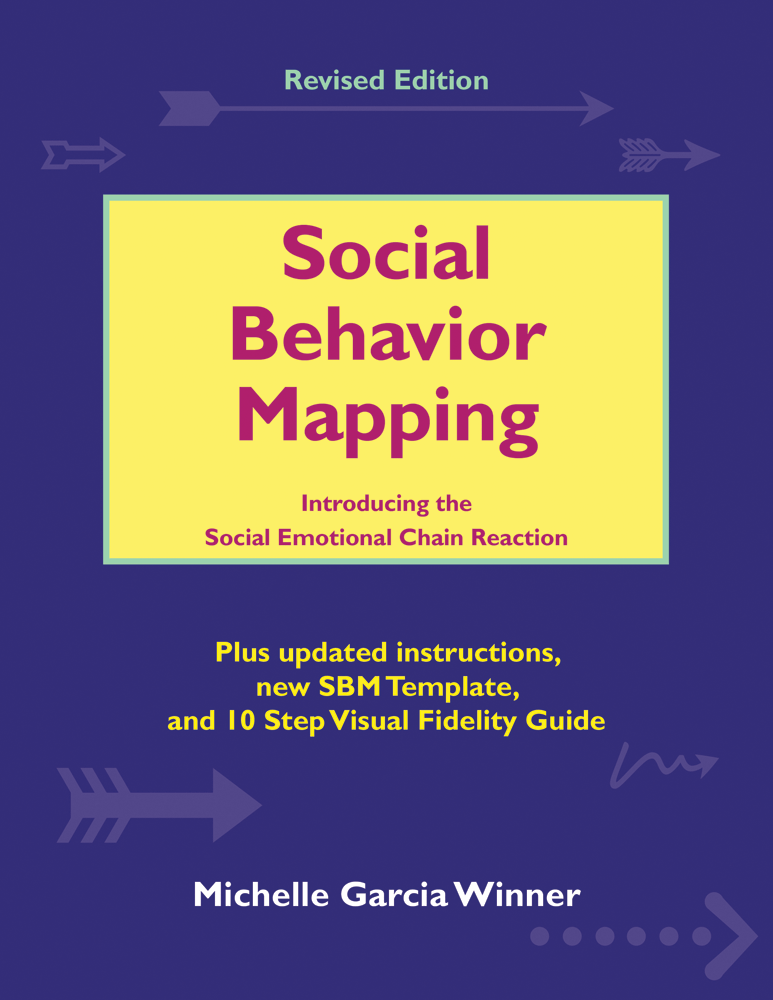 Social Behavior Mapping, a visual teaching template and core framework within the Social Thinking® Methodology, makes the complex and abstract process of how we all affect one another more concrete. This revised edition includes 50+ completed Social Behavior Maps (SBMs) to use as references when helping students (ages 8+) fill out a blank map; a reproducible template; a detailed description; and a10-Step Visual fidelity and teaching guide.
see more
Browse All Products

Some students have significant anxiety that can get in the way of them accessing their solid social knowledge. We have found that helping students learn about their own anxiety can also help them recognize and practice their social competencies. A few years ago I developed a tool, alongside and with a group of students, to help them talk about the complexity of their social anxieties and how it can impact their social world. We collectively named the tool, The Spirals or The Spirals of Anxiety. This article will show the tool and explain our group journey.
see more