Having survived Auschwitz, Max encouraged us all to “enjoy life!”

Max Rodrigues Garcia was born in Amsterdam, Holland to a Dutch Jewish family in 1924. In 1942 his sister was tragically one of the first Dutch citizens to be arrested by the Nazis shortly after her 16th birthday. In 1943 Max went into hiding in a home arranged by the Jewish Underground. Later that year he was arrested in Amsterdam for being a Jew, beaten repeatedly by police for refusing to discuss details of the underground, and then focused his smarts and energy on surviving two death marches and five concentration camps: Westerbork, Auschwitz, Mauthausen, Melk, and Ebensee. His liberation day, May 6, 1945, was treated as a birthday in our family. 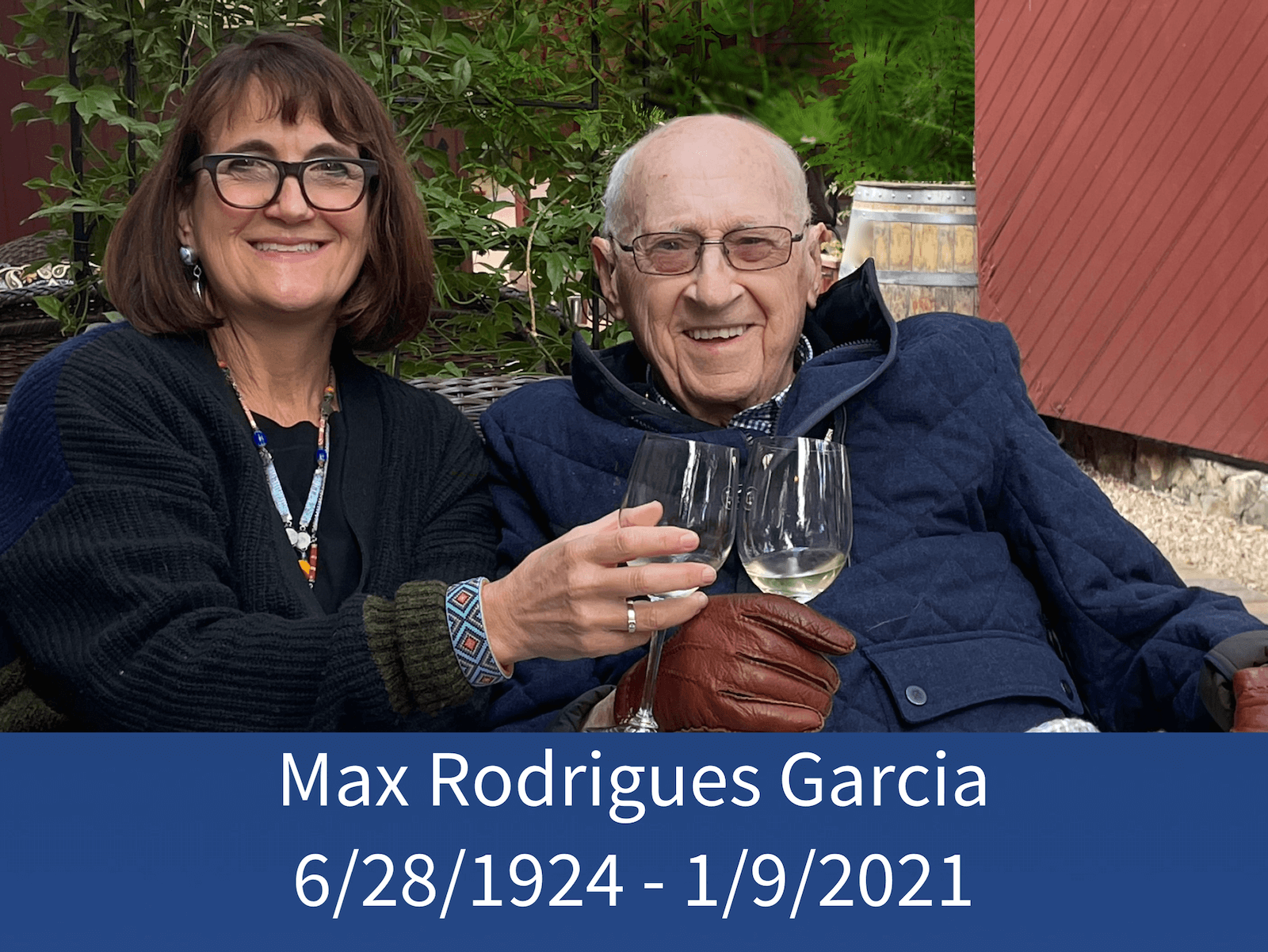 Luckily, Max was adopted by the US Army as an interpreter immediately after his internment. Colonel Clark sponsored his passage to the USA in fall of 1946. Max became an official member of the US military while establishing his life in the USA. He was a highly intelligent man whose formal education as a child only lasted until he was 13 years old; while in the military he was able to take some college courses. Ultimately, without a college degree he managed to become a licensed architect through discipline and self-study. In the early 1960s he was able to achieve one of his life-long dreams, to open his own successful architecture practice. He met his wife, Priscilla Alden Thwaits (Pat) in 1956, a skilled writer working for Newsweek. Together they raised three children, David, Tania, and Michelle in San Francisco, California. Pat became Max’s counsel and support system, helping to raise Max out of the Holocaust while also documenting his life story in the book, Auschwitz, Auschwitz…I Cannot Forget You as Long as I Remain Alive. Max and Pat also helped to found the Holocaust library in San Francisco, California and they became active in Holocaust memorial projects in Europe. During that time, they learned when and where his parents and sister were murdered along with dozens of distant family members.

Gratefully, his daughter, Michelle, and his granddaughter, Heidi, were able to accompany Max on a final trip to Europe in January 2020, where he visited his hometown, Amsterdam, his favorite European city, Vienna, and then attended the 75th anniversary of the liberation of Auschwitz in Poland. He thoroughly enjoyed the adventure.  Over many years he was interviewed and celebrated with distinction and honors, his legacy a detailed, permanent record of his survival, life, and indomitable spirit when surrounded by death.

Max moved into the home of his daughter, Michelle, and her partner, in March 2020 due to the COVID-19 pandemic. During this year he enjoyed many good times, however, as his medical issues progressed so did his dementia. With his cognitive filters declining, he became increasingly distressed that Nazis were still chasing him, that he was about to be arrested again, or that he was living back in the concentration camps. CBD-THC treatments helped to take some of this fear away, but it was something that could not be completely managed by medications in the last months of his life. In December he went further downhill with nearly constant agitation, and so it was time for him to pass, and he let us know he was ready. According to Max, his mom, sister, and dad appeared in our house in his final weeks.

Max passed away peacefully surrounded by family in our home on January 9, 2021.
Hopefully, he is at peace wherever his spirit is.
He was certainly a remarkable man who impacted many.

Now it’s time to be relieved and grateful that he’s no longer suffering and lean into feeling the grief for the loss of a man who did his best to build his life and support his family in spite of the traumas he suffered that we could never fully imagine. He was also able to mostly maintain an outwardly optimistic attitude and to strive for success within himself and his children.

It was incredibly sad to see that his end of life led him to relive the horrors experienced in his late teens and early 20s. It’s a reminder to us that trauma becomes a tattoo in one’s mind that lurks in corners and is not easily revealed, despite being surrounded by loving, healthy relationships. Even while his powerful mind diminished, and the horrors revealed themselves, between these times of darkness he always knew he was loved deeply and admired by many.

As his children, we are now the torchbearers of his pain and love of life. He always signed his book with “Enjoy life!”—and so we will find our way back to that. Max is survived by his three children and their partners, five grandchildren, and two great grandchildren who plan to make their entrance into the world in Spring 2021.

Michelle Garcia Winner and her family

Auschwitz Auschwitz… I Cannot Forget You

Auschwitz, Auschwitz... I Cannot Forget You, As Long as I Remain Alive is the first-person story of Max Garcia, his beloved family, and his survival of Holocaust tortures at concentration camps. But this isn't a story only about the past. It is about the present and the future.

From tales of cunning within the camps to those of how Max rebuilds his life after liberation, the book recounts how the Holocaust could not extinguish Max's dreams. And in San Francisco, Max realized those dreams: having a family and becoming a successful architect. Max today inspires generations with his story and character. As Max's grandson writes in the new final chapters of the book, each written by Max's children and grandchildren: "To me the knowledge I have gained from reading and hearing this story helps me understand better the kind of person I want to be and to apply my Grandpa's lessons to my everyday life."

Readers of the book and experts on the Holocaust have called it "an important witness... Max's story is one of brutal honesty and ultimately one of inspiration as a person restarts his life in a new land..." and "...a most important and touching testimony for the young generation to remember and to learn from." 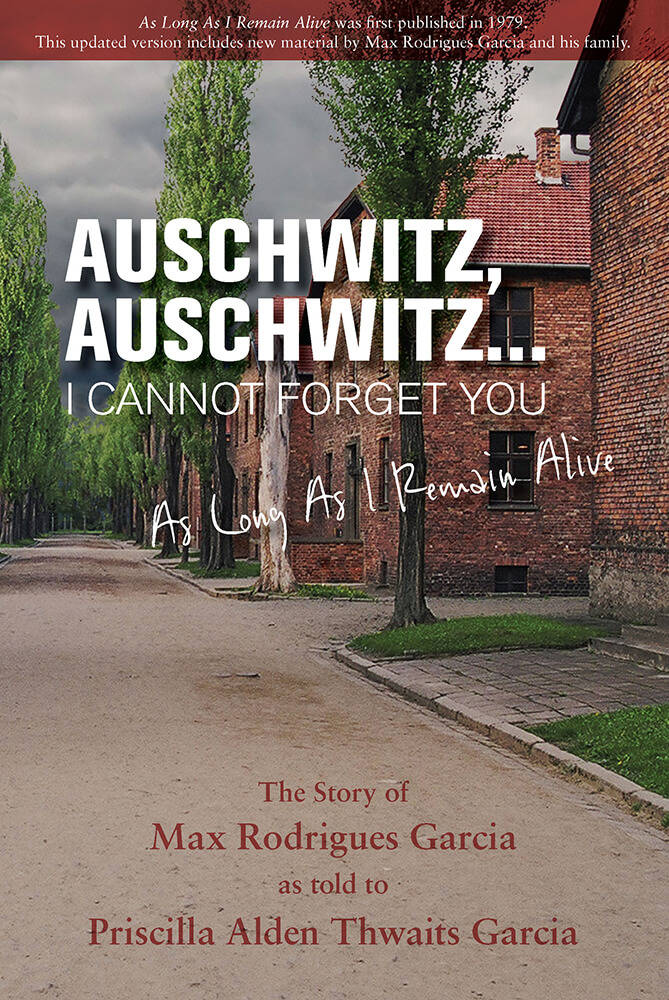